Posted on September 7, 2012 by christinamitchelldesigns

Many years ago now, when I was much younger and fitter I would sometimes dash home and make this pizza after a day out in the ministry and then cycle madly, with the pizza bungie-hooked onto the back of my bike, still hot from the oven, to meet Tim half way from work and we would sit beside the River Lugg and eat big chunks of this and prepare our study for Sunday.

It is still one of those favourite finger foods for us and is probably the preferred pizza for Tim. If the tomatoey/acid flavour of the traditionally known pizza is not to your taste then this might be worth a try. If you love anything in the bread/pizza line this is definitely for you.

If you have a bread machine this is very easy to make, just set one pound of flour to mix and rise once. If you have any mashed potato left over from a previous meal add anything up to one cup worth to the mix right at the beginning.  By the way, mashed potato in an ordinary loaf is good too.

If no bread machine is available it’s really not too much work to mix and then knead the following:

Mix the above ingredients together then stir in enough warm water to make a dough, you want to have it soft, not too dry, so you will need to keep flouring your hands to stop the dough sticking to you.  Turn out onto your work surface and knead for about ten minutes, until the dough is well mixed and smooth.

Put the dough back into the bowl and cover with cling film to stop the surface from drying, put it into a warm place to rise.

While the dough is rising, peel and slice about a pound of potatoes, or about four medium ones – slices about 1/4 inch thick. Put into a pan of cold water and bring up to the boil, let them boil for about three minutes then turn the heat off, they will continue to cook in the hot water and hopefully not break down, do watch them however as you don’t want soggy potatoes on top of your pizza. As soon as they are done drain and cover in cold water.

Thinly slice one large or two medium onions and break up the rings.

When the dough is roughly doubled in volume tip it out onto your work surface, knead it a little to knock the air out and then roll into a large rectangle about 1 cm thick, using lots of flour to stop it sticking to everything.  If your baking tray isn’t big enough to take it cut the dough in half and make two pizzas.

Pour some olive oil over the dough and using your fingers spread it all over. Next place the slices of drained potatoes all over, overlapping them with one another as you go, then cover with the slices of onion, sprinkle with rosemary, fresh or dried and then a generous drizzle of olive oil all over and finally a good sprinkle of Himalayan salt. 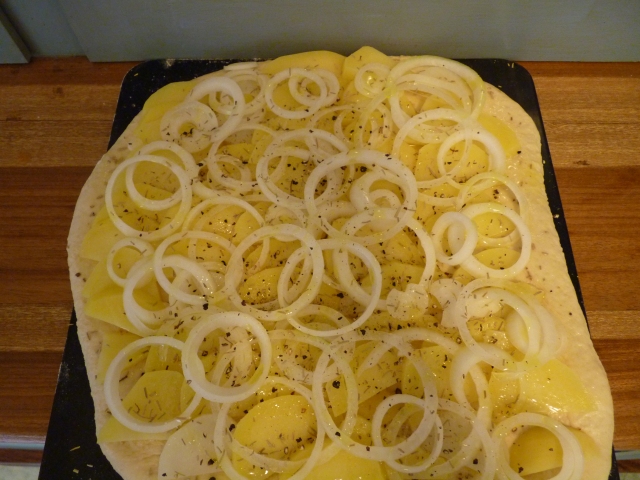 The above picture is of the pizza as we traditionally cook and eat it, however Katie fancied one with mozzarella on top which was delicious too…

Cutting pizza up with a large pair of kitchen scissors makes life a lot easier than battling with a knife.

This comforting fragrant pizza works well with salad for a picnic or lunch outside and don’t worry if you have any left over it really tastes good at room temperature. In fact, Katie and I decided that we thought the flavours were better when we ate the left overs for supper, when it was no longer hot, but the scent of rosemary and onion had infused the potatoes, what joy!

"Living Life to the Full - Designing it One Step at a Time"
View all posts by christinamitchelldesigns →
This entry was posted in Recipes and tagged potato. Bookmark the permalink.