Posted on July 3, 2012 by christinamitchelldesigns

While busy preparing lunch my eye was caught by activity outside the kitchen window – Evan, our weekend guard, with the neck of his tee-shirt pulled up over his chin and nose, was walking very slowly, arm extended as far as it would go with a stick, four feet long held out in front of him, dog following at his heel, also in stalking position.

“Whatever are they up to?” I thought.

I didn’t have to wait long before his head appeared at the window,

“The dog has caught a snake, shall I throw it next-door?”

“No, but it is very dangerous and very poisonous,” he said.

“Put it in a bucket, Tim will want to see it when he gets back.”

Dog and guard went back to the snake and stood, both straining forward, staring into the bucket, Evan with his face covered, patiently waiting for Tim.

Twenty minutes later Tim arrived and further inspections were made, books on snakes and other such things were retrieved and consulted, and finally when an identification had been made, the snake was removed from the bucket and given the kiss of life so that a photo could be taken for the records.

So, what was this highly dangerous beast that we were harbouring in the garden? Nothing more than a very large tropical Blind Worm, (gymnopis multiplicata, or if you are into Spanish – Culebra de dos Cabezas – snake with two heads) yes, blind and completely harmless. According to the book he was on the wrong side of the country, but then if you are blind I suppose it’s an easy mistake to make. Also, if he was going by the book he should only have been out and about at night and when it rains, clearly blind worms don’t follow rules.

So, here for your enlightenment, incase you meet his cousin on a wet night, is the fearsome beast that was roughed up by The Mutt and then clobbered on the head by Evan, sufficiently revived to provide an identifiable likeness: 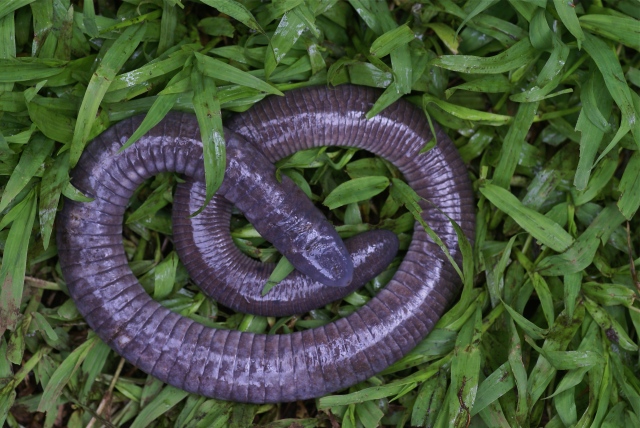 "Living Life to the Full - Designing it One Step at a Time"
View all posts by christinamitchelldesigns →
This entry was posted in Uncategorized. Bookmark the permalink.

4 Responses to The Fearsome Beast