Posted on June 29, 2012 by christinamitchelldesigns

Yesterday, on our trip to the capital, Managua, we noticed that the air quality had changed and everything was exceptionally clear, including the four volcanoes that we can see on the journey: Momotombo was looking spectacular with a ring of cloud sitting around it’s shoulders and Momotombitio serenely at it’s feet in the lake.

Today the weather continues to be beautiful, gentle breezes coming from the Pacific and a bright blue sky with high puffy white clouds – far to nice to be inside cooking over a hot stove so I decided to get the ‘Nicaraguan stove’ going and enjoy cooking lunch outside.

Not one of our immediate neighbours has the luxury of a gas cooker, so cooking anything requires planning and time – the wood has to be gathered, stored and kept dry.  The fire has to be lit and allowed to heat up before it can be used and then carefully managed so that as little wood is used as possible.  The temperature is regulated to some degree by pushing in or pulling out the wood.

For me cooking outside is a pleasure I can indulge in when the mood takes me, for our neighbours, however, it is a way of life – the instant gratification of putting on the kettle for a cup of tea (or coffee), or cooking a quick snack doesn’t exist for them and for most three square meals a day is unheard of.

So, with humming birds overhead in the Abutilon flowers and big tropical butterflies dancing around I lit the wood and while the fire was heating gathered the ingredients, then set to and made a spicy aubergine and potato dish:

Into a comal of hot water I put two medium-sized potatoes, peeled and cubed (waxy rather than flowery ones work best) and cooked them until just tender.

While the potatoes were cooking I peeled and finely chopped a thumb-sized piece of ginger, several cloves of garlic and a jalapeno chilli, chopped a large onion and cubed a large aubergine.

When the potatoes were cooked I drained them and put them to one side and into the comal I put a couple of glugs of oil to heat, then added the onion, garlic, ginger and chilli and stirred occasionally until the onion became translucent, then I stirred in a heaped tablespoon of garam masala and the chopped aubergine and stirred every so often until the aubergine was cooked and starting to break down at which point I added two chopped tomatoes and the cooked potatoes, and again stirred occasionally, when the tomatoes started to break down I added a couple of large handfuls of roughly chopped spinach, stirred until it was wilted and added Himalayan salt to taste, and dressed with chopped cilantro fresh from the garden, (use chopped fresh coriander.) 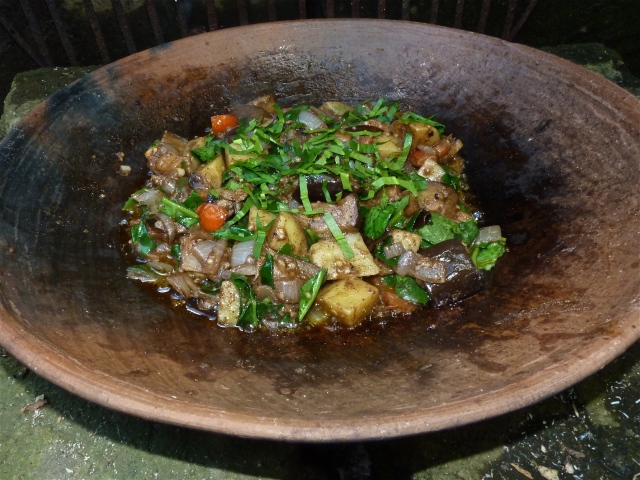 We ate our Spicy Aubergines and Potatoes with a large mixed salad. But, if you prefer something more substantial this works well with ready cooked chick peas stirred in and served with rice or naan bread.  We also enjoy it as a side vegetable with chicken, and served with the additional bits and pieces, like Mango Chutney, Lime Pickle and popadums.

"Living Life to the Full - Designing it One Step at a Time"
View all posts by christinamitchelldesigns →
This entry was posted in Recipes, Uncategorized and tagged aubergine, Chutney, potato, spices. Bookmark the permalink.

2 Responses to Spicy Aubergine and Potatoes